The peak of my TDD/unit testing drive was represented by my "Six Simple Steps to Unit Testing Happiness." I had fun doing these presentations, and my audiences laughed at how I made fun of we all tested (or rather did not test). And I am sure that I did have some impact on behavior....but....

While I am still convinced of their value, I spend far less time promoting these ideas these days, mostly for the following three reasons:

1. I hate hypocrites (who doesn't?). And the hypocrite I detest more than any other? Me. Bottom line is that I did not / do not use either of those tools (nor SQL Developer's integrated unit testing) when I write code. Why? All the usual excuses I pooh-poohed in my talks: "Not enough time" "Hard to set up and tear down database state" and many more. At my advanced stage of life (I turn 57 in September), I am less tolerant of my own hypocrisies.

2. I don't believe it is possible to dramatically change the behavior of humans, not through lecturing them anyway. People who have been avoiding testing for years or decades (or, to be a bit kinder, unable to test due to lack of time and resources) are not likely to start. Barriers to entry are too high, by which I mean:

3. It's still too hard. utPLSQL requires writing too much code. Code Tester for Oracle and SQL Developer both generate a bunch of code, but defining a stable dataset for testing and refresh that dataset remain very off-putting tasks.

I try, these days, to live in the real world, to accept things as they are, and work from there. Doing full-blown test driven development (TDD) simply is not going to happen widely in the Oracle database programming world.

That doesn't mean, however, that we should just throw up our hands and say "Oh well, I'd love to 'do things right' but I just can't" and then fall back into our lovely "rapid application development": an absolute minimum of process, standards and collaboration, and the maximum possible number of short-cuts. (which we do all too eagerly, if we are really honest with ourselves)

So here's where I get to the point of this post: I'd like to offer a simple, practical, eminently do-able "poor man's" version of TDD, one that anyone can do, one that doesn't take a lot of time to do, one that can give you some very quick positive feedback, thereby encouraging you to do it more and more:

[Humbling note: we live in a post-modern world. So of course I am not the first to come up with this term and associated meaning. Check out Dan DeMeyere's blog. But hey! I am still blogging. He stopped "back" in 2014. So there.]

Assuming you are reasonably competent and want to write high quality code, I suggest one of your (our) biggest challenges is simply to remember what it is we need to do, and what we need to check for, when producing a new program.

So why a checklist?

Many surgeons - whose work is way more complicated and life-critical than ours - have discovered in the past few years that using a simple (almost ludicrously simple) checklist before starting surgery can have an enormous impact on success. Their checklist might feature questions like:


I know, I know. Seems crazy obvious, right? But it works, it really works. Which is a sad commentary on the medical system, sure. The main thing, however, is to focus on getting better.

So....why wouldn't it work for developers, too? Here is my suggestion for "Checklist Driven Development" (specifically as it applies to a substitute for actual unit testing):

Before you are about to start writing a new program (or upgrading an existing one), ask yourself this question:

How will you know when it's safe to stop, and move on?

All too often, the answer is "I'll know it when I see it." or "When I am done testing it." But so few us actually have any kind of test plan, so testing really comes down to "Try a few of the most obvious - to me - scenarios and that should be good enough."

Or if we do have a test plan, it is written after the program has been written. And that's a really, really bad idea. Here's why:

Ever try to proofread your own writing? It's nearly impossible to catch typos and grammatical errors. Since you wrote it, you know it too well, and your eyes/mind just skip over errors, automatically adjusting to what you expect to be there, rather than reading what actually is there.

That's why you will hear the recommendation to proofread by reading the words in reverse. That way your brain can't glom onto the meaning. It has to process each word individually.

Kind of hard to do with code and, anyway, the compiler will take care of most typos.

But if you build your test plan after you "finish" writing the program, your mind will subconsciously focus on test cases for the parts of the program in which you have the most confidence. And that same mind of yours will veer away from the parts that you pretty well know are sub-par and likely to be socked full of bugs (primary rationalization here: "(Almost) no one's going to use those features, anyway." Yeah, uh huh.).

Don't fall for that simple trap!

Instead, build the checklist first.

Right before you are going to start that next program, ask yourself: "What does this program have to be able to do in order for me to report to my manager that I am done?"

Then open up an editor and put it into a document. It doesn't have to be anything fancy. Here's what I (pledge to) use (from now on): 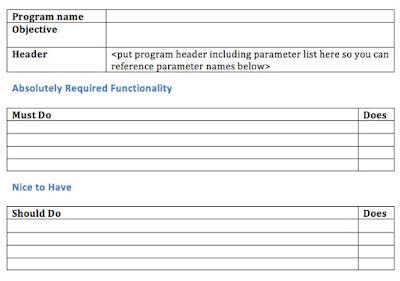 This way, your list will not be affected (corrupted) by the fact that you only have five minutes to test when all is said and done. It will not be perverted by subconscious bias. You can, with a light heart and optimistic outlook, simply list the things the problem should do.


Here's an example of a specific checklist: 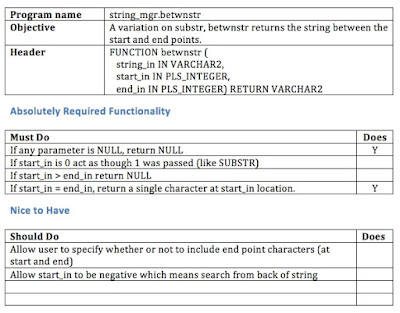 Is ChLDD an adequate substitute for real testing, unit or otherwise? Absolutely not.

Is it better than launching oneself full speed into writing a program before you've thought through what is needed and how you are going to build it? I think so.

Could this be improved? Sure, you could add a section for defining behavior when errors occur, for example. But at least for this post and for my initial use, I want to keep it dead simple. Which means I can fill it out quickly and get immediate value for the time spent.

Let me know if you try it, and what your experience is like.