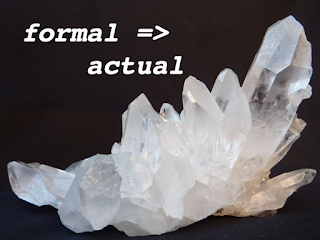 The first and most important criteria of high quality code is that it meets user requirements (it's "correct").

The second most important criteria is that it fast enough to meet user needs. It doesn't matter that you might be able to make it go faster.

The third most important criteria of excellent code is that it is maintainable. Why, you might be wondering, is maintainabiliity so important?

Most of the code we write, especially code that lives in the database, sticks around for a long time. Well past the point when you were familiar with the code you wrote. And likely past the time when you are still working on that same code or project.

So the overall cost of development of that code is not just the initial build expense, but also must include the cost of maintaining that code. All too often we are so absorbed in meeting deadlines that we sacrifice clarity and readability to "get the job done."

And then we - or others - pay the price later. Conversely, if we take advantage of features in PL/SQL that enhance readability of code, the burden of maintaining it later will be reduced. Hey, it might even make it easier for you to debug your code today!

Both of the following calls to total_sales will fail. The first statement fails because the named notation comes first. The second fails because positional notation is used, but the parameters are in the wrong order. PL/SQL will try to convert ‘N’ to a NUMBER (for company_id):

Now that you are aware of the different ways to notate the order and association of parameters, you might be wondering why you would ever use named notation. Here are two possibilities:

You can list the parameters in any order you want. (This does not mean, however, that you should randomly order your arguments when you call a program!) You can also include only the parameters you want or need in the parameter list. Complex applications may at times require procedures with literally dozens of parameters. Any parameter with a default value can be left out of the call to the procedure. Using named notation, the developer can use the procedure by passing only the values needed for that usage.

Portions of this post have been lifted (gently, carefully, lovingly) from Oracle PL/SQL Programming, with permission from O'Reilly Media.